Five years ago Eric Clayton’s life was in turmoil. What’s new, right? Ever since he formed Saviour Machine in 1989, in sunny California, with his brother Jeff, it seems much of his artistic career and his private life has been cursed rather than blessed. The story’s about banishment, mismanagement and business relationships gone sour are legion. The man even felt the need to write a book about it cause it was impossible to explain everything anymore in an interview. And yes. There’s also the stories about some album that remains unfinished. 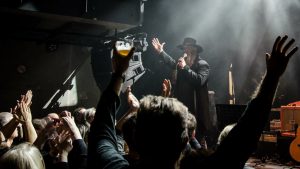 But this time it was serious. In 2004 Eric got diagnosed with Barrett’s Esophagus, a condition that got worse over the course of some years.

This is not a state in which an artist can create. Especially not when you’re dealing with the end of the world every day. Slowly but surely, both Eric’s musical career and his social life burned out. Saviour Machine was dead, his marriage fell apart. With little more on board then some clothes and a baseballbat, Eric Clayton retreated to a trailer in the middle of the Utah dessert, determined not to be found by anyone.

It took a number of years until Eric’s life took a turn, as he found a medicine that turned out beneficial to both his physical and his mental wellbeing. Shortly thereafter came an unexpected invitation to come over to the Netherlands to perform in a series of elaborate, top-cast live performances of The Theatre Equation; the lovechild of Dutch prog-maestro Ayreon whim whom Eric had already done studiowork in 2004, on the highly praised rockopera The Human Equation.

As he had basically said farewell to the music industry, it took some persuasion from the Ayreon camp. But eventually Eric went for it. Thinking this was a good opportunity to make a little money and show his then recently graduated daughter a bit of Europe. But what eventually happened, over the course of two weeks in 2015, was something much greater. Not only did Eric find out, much to his own surprise, he enjoyed delving deep into putting on a grand scale production, singing and playing with people, getting back on a stage to perform every night, proved there was still a little bit of that old beast inside him.

The death of David Bowie, whom had always been Eric’s greatest source of inspiration, in januari the following year, urged him to pay musical tribute. Reconnected with his brother Jeff, the founding fathers of Saviour Machine set out to see if they still found solace in creating music together. And behold. Instead of doing one song, the collaboration evolved into the Bowie/Decade project in which, for a whole year, they released a Bowie cover every month. The spark that came from this endeavor reached further then the two brothers. By the time they got to working on the third track in the series, all the other members of Saviour Machine had reached out wanting to take part. Creative juices started to flow and by the end of the Bowie-project everyone was eager to start work on new material. New Saviour Machine material. A legend was reborn. 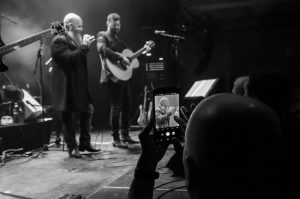 But something else had happened during that faithfull time in the Netherlands. Eric found love. A love that eventually proved so strong, the vocalist decided to permanently relocate to Europe in the summer of 2017.

Inevitably, it dawned on Eric Clayton that there was just one thing missing to make his new, happier life complete: a band to go out on stage with.

Yes, through the wonders of modern technology, Saviour Machine is very much working on a new studio album, to be released whenever it is done. But due to a whole series of circumstances, for now, it is impossible for Saviour Machine to go on the road.

Determined not to let his new found inspiration and eagerness slip, Eric reached out to a couple of close Dutch friends with a simple mission: to go out, rock out and have some fun.

And here we are. Eric Clayton And The Nine are about to embark on a tour that will start on November 2018 in the Netherlands and will eventually take them to various festivals and clubs all over Europe. Get ready for a set that’s stuffed with Saviour Machine classics that in many cases haven’t been performed live, by a rockband, in over twenty years, a selection from the Bowie/Decade project and tributes to some other musical heroes.

Eric Clayton is back on stage. Who knows where this will lead.

The Eric Clayton debut solo album ‘A Thousand Scars’ is released; have a listen, or order the vinyl or CD copy, at our webshop. 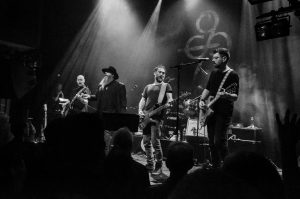